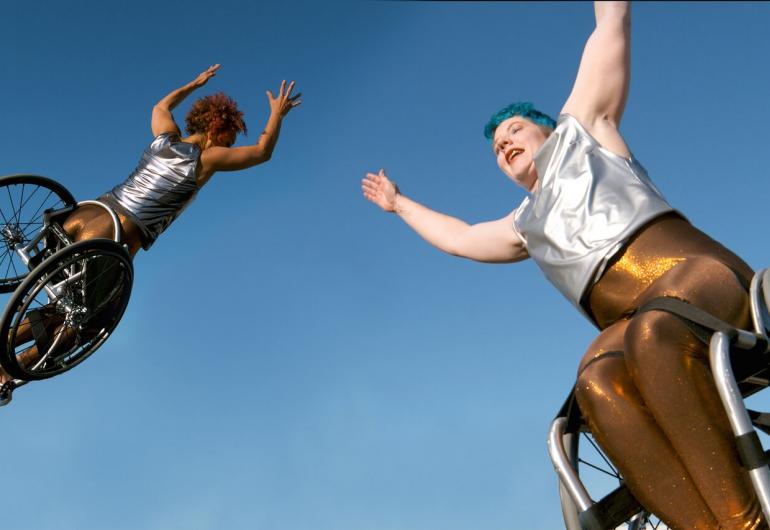 Available for viewing online, this selection of short films curated by Alice Sheppard (with assistance from curator Michael Walsh in the Walker’s Moving Image department) is focused on arts and disability. Featured in the program is Kinetic Light’s own riveting Revel In Your Body, which captures the artists’ stunning choreography in slow motion to reveal the joy of flight on wheels. The program also features several short films from the Walker’s collection.

Revel In Your Body is a film featuring disabled dancers and Kinetic Light artists Alice Sheppard and Laurel Lawson. Set against the Atlanta skyline, this film takes high stakes wheelchair choreography into the site-specific playgrounds of parking ramps, metal railings, and breathtaking blue sky. Revel In Your Body is directed by Katherine Helen Fisher and choreographed by Sheppard, with Lawson.

Making Where Good Souls Fear features gritty virtual reality footage from New York City streets and subways and beautifully-lit performance excerpts. This 11-minute documentary short by filmmaker Dahkil Hausif follows Sheppard as she cuts a pathway from street to stage and back, exploring her approach to choreography and disability arts along the way.

Compiled almost entirely of extreme close-ups of people and animals, Bruce Baillie’s Valentin de las Sierras is an intimate portrait of working-class life in Chapala, Mexico. Baillie paired a telephoto lens with an extension tube off the back of the camera to create a very limited focal plane for this 1968 short on 16mm. This strategy, rarely used in film, achieves an immediacy necessary to capture the tenderness he feels for the village. The resulting footage focuses on the smallest details of an image at close range. To complement the visuals, the filmmaker parsed together a textured soundscape by layering clips of children laughing, mules clomping, and traditional guitar song. The film opens with an image of Baillie sitting in a tree next to a young Mexican boy as he recounts the ballad of Valentín de las Sierras, a Mexican revolutionary war hero. The short then flashes between the eyes and hands of young children at play, the daily duties of farmers at work in the field, and the aged face and fingers of Jose Santollo Nadiso, the blind musician who plays the corrido on his guitar. These intimately shot details are connected in a way that gently moves through the landscape without any disorientation.

In Miranda Pennell’s Human Radio people dance in private moments of personal abandon across London in the summer of 2001. The film is the result of the director’s work with the first ten respondents to a local newspaper advertisement that she placed seeking ‘living-room dancers’ – people who love to dance behind closed doors.

Yvonne Rainer created the film version of Trio A in 1978. It was one of her most influential choreographed works, and was first presented in 1966 as part of the larger performance The Mind Is a Muscle, Part 1 at Judson Memorial Church. Rainer, Steve Paxton, and David Gordon performed the work simultaneously but not in unison. The piece demonstrates Rainer’s exploration of the body as an object belonging to a greater whole. It is comprised of a sequence of unpredictable movements that disregard the tempo of the music and instead unfold in continuous motion according to the internal pace of each dancer. Trio A also meditates on the gaze: the dancers always avert their eyes from direct confrontation with the audience by independently moving the head and closing the eyes or casting them downward.

These films are presented in conjunction with Kintetic Light.

Major support to preserve, digitize, and present the Ruben/Bentson Moving Image Collection as part of the Walker's collection is generously provided by the Bentson Foundation. 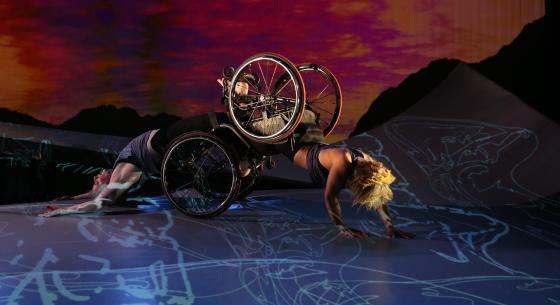