REEL MOTION: "The Hate U Give": Art as Advocacy

When author Angie Thomas set out to write her stunningly beautiful, gut-wrenching coming-of-age novel The Hate U Give, she was inspired by two things. The first was the drive to write a story about a young black girl’s experience, or as she referred to it in a New York Times interview, “a girl version of Boyz n the Hood.” The second was the music and advocacy of Tupac Shakur. The book title is taken from Tupac Shakur’s philosophy of social injustice, which he had tattooed across his own chest as the acronym THUG LIFE.

Thomas also credits a professor in the writing program where she wrote the short-story that would become “The Hate U Give” for helping her realize that in seeking to write a story about a female character that draws on her own experiences, she could use her art as advocacy, just as Tupac had done. As the music of Tupac had, as Thomas said in an interview in Cosmo, “helped her realize who she was” when she was young. Thomas succeeded in bringing the story of Starr Carter, a girl who lives in two worlds, to millions of young adults who now cherish the book as a classic for their generation.

Fast forward to 2018, when director George Tillman Jr.’s film adaptation of THUG managed to bring all of the emotional heart of Thomas’ novel to a 2 hour and 12 minute feature film. Like the novel, the film was made with teenagers in mind every step of the way and without pulling a single emotional punch. As Thomas didn’t take her young audience’s intelligence for granted, Tillman didn’t either when constructing scenes that were pivotal moments for the film’s young protagonist.

“Young kids today are very smart,” Tillman said in a media interview. “They watch adult films, they get things very quickly, and they’re very sophisticated.” Acknowledging the sophistication of his young audience posed a creative problem for Tillman when he submitted a cut of his film to the MPAA to obtain its rating. If Tillman tried to sanitize the language, his target audience would know. Given that two crucial scenes in “The Hate U Give” require Shakur’s “THUG LIFE” concept to be explained in full, there were no easy way to work around using the MPAA’s most vilified curse word. (Hint: it’s the one that rhymes with “duck.”)

Tillman wasn’t just working to craft authentic scenes that touched upon all of the micro-aggressions that Starr faces from her white classmates at her private school or how her father’s past as a former gang-banger affects their family as Starr struggles to cope with a tragic killing. He worked to make sure the film received a PG-13 rating so that the kids who cherished the book would be able to see the film.

The Hate U Give was chosen for the Northrop Film Series because the situations that Starr, her family, and community struggle with are also the subject of choreographer Kyle Abraham’s piece Meditation: A Silent Prayer. Abraham’s company, A.I.M, will perform the piece and others at Northrop on Sat, Feb 29. 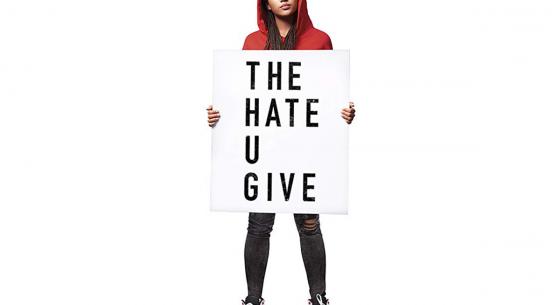