Grammy-winning organist Paul Jacobs returns to Northrop in a solo recital showcasing his expressive playing talents as well as the symphonic possibilities of works by Bach and Handel, and the historic Aeolian-Skinner Opus 892 pipe organ. Jacobs thrilled Northrop audiences with the debut of a co-commissioned piece in 2018 when he appeared with the Minnesota Orchestra for an inaugural performance celebrating the restoration of the organ.

"[Paul Jacobs] is not only astounding in his technique, musicality and interpretive insight, he's as graceful as the ballet dancers who once wafted across the Northrop stage (and, if all goes well, soon will again)." — Rob Hubbard, Star Tribune

"During these anxious times, the music of George Frideric Handel offers consolation and hope." In this article for the The Wall Street Journal, Paul Jacobs explains how we can, "experience—online—the full splendor of Handel’s genius."

From the Director of Programming

Those of you who attended the rededication of Northrop’s Aeolian Skinner Organ in 2018 will remember the virtuosity and personality of Paul Jacobs who appeared with the Minnesota Orchestra on that concert. By popular demand we’re bringing him back for a solo recital on Apr 13. His program will delve deeply into Symphonic Bach. As someone who has played our organ before, Jacobs is also interested in the particular sonority of the Northrop Organ and may add some additional music to the program to highlight our glorious instrument. 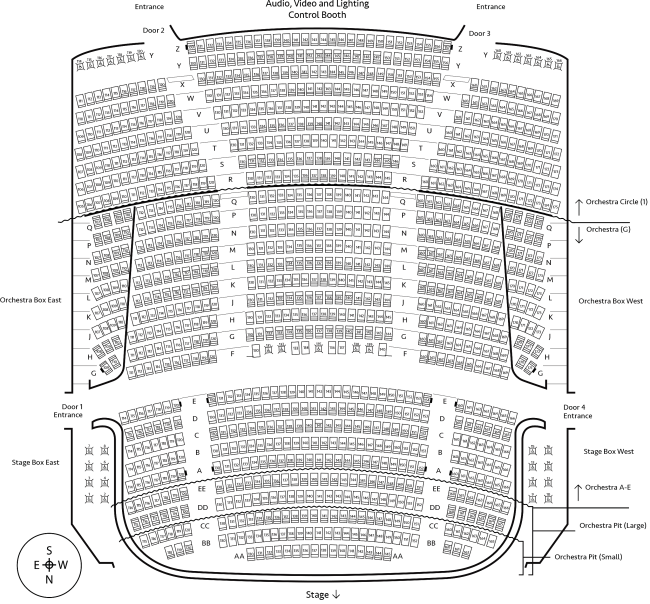 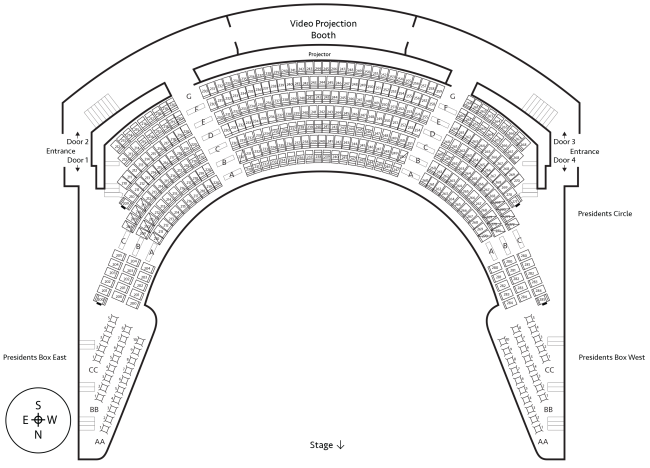 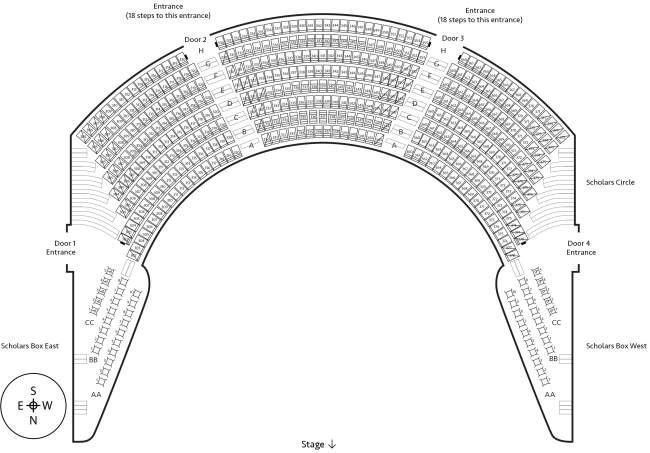 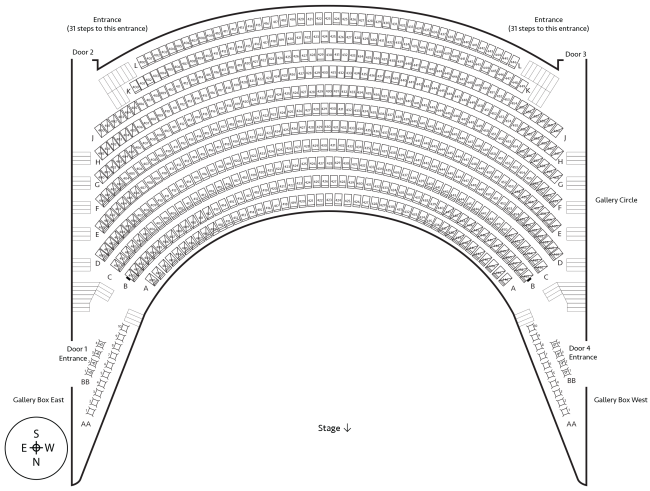 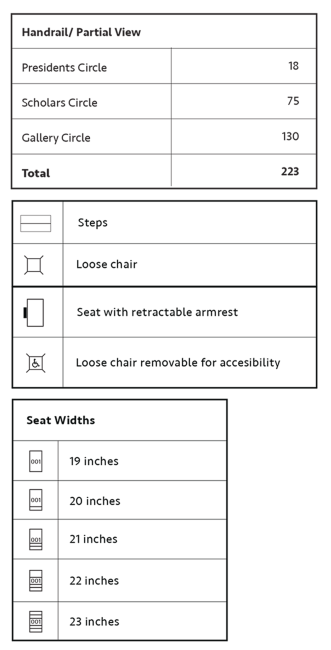 View the Program Notes for this Performance 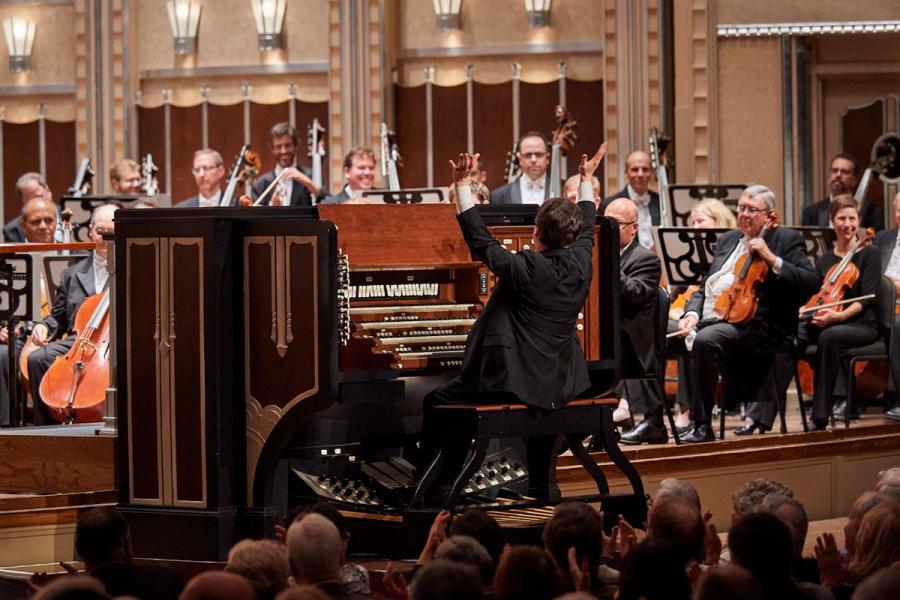 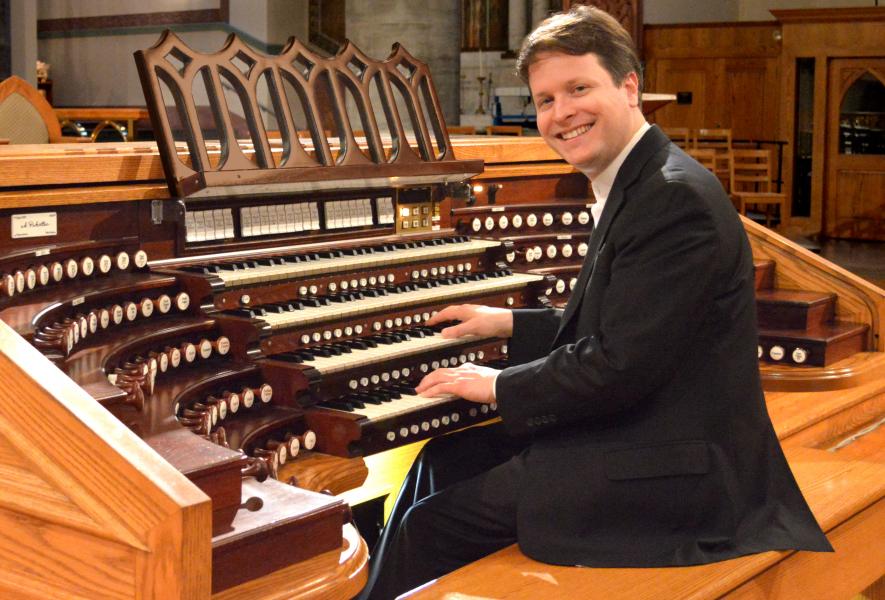 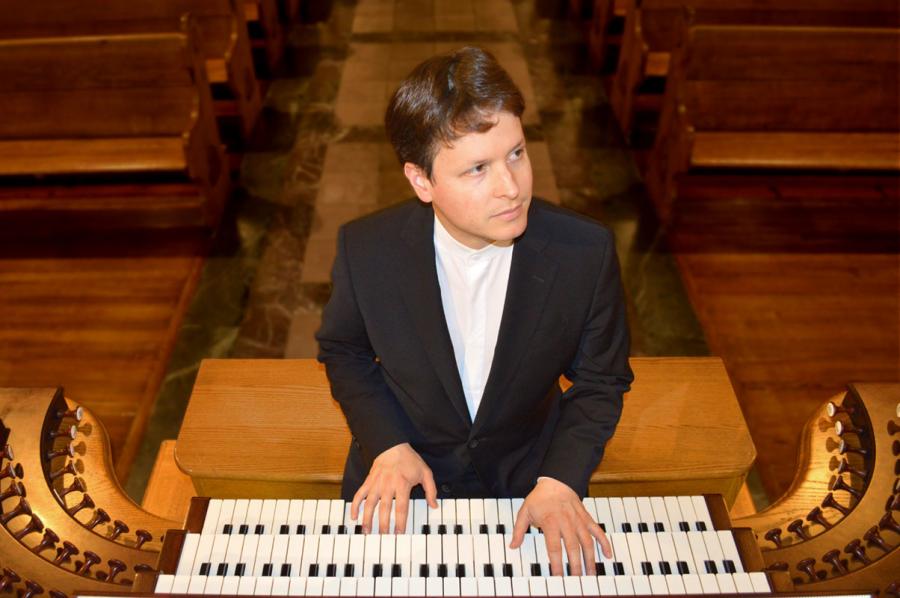 Photo by Ficarri Zelek
Previous Next 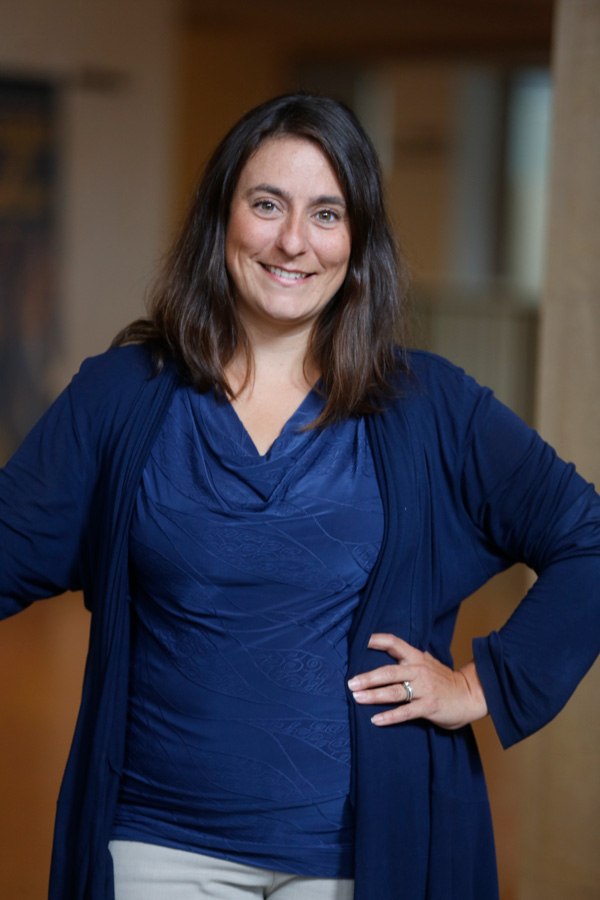 Greetings, and thank you so much for joining us for Paul Jacob’s first solo pipe organ concert at Northrop!

Some of you may remember the first time Paul Jacobs was here, when he joined the Minnesota Orchestra under the direction of Music Director  Osmo Vänskä for a pair of concerts in 2018 to inaugurate Northrop’s newly refurbished Aeolian Skinner pipe organ. Those concerts live very vividly in my memory and often come up when I’m asked about my favorite Northrop moments. Those of you who were here probably recall that the organ was featured in that program during the world premiere of John Harbison’s piece What Do We Make of Bach?, commissioned by Northrop, the Minnesota Orchestra, and the Seattle Symphony. Many of us were left wanting to hear more from the pipe organ, and Paul Jacobs certainly obliged by treating us to an off-program encore performance of Bach's Fugue in A Minor BWV 543. This piece joyously and dramatically showcased the organ and filled my soul to overflowing so that it spilled out into a standing ovation alongside everyone in the theater that night.

We have been almost entirely deprived of live music for over a year now. This program offered by Paul Jacobs will delve into Symphonic Bach, and is sure to fill the parts of us that have been empty for too long, connecting us back to deep emotions that are uniquely human. I am so pleased to share that experience with those of you in the theater as well as those of you watching from home.

Thank you for joining me. I am especially grateful to our subscribers and donors. Now more than ever before, it is your active involvement that will ensure Northrop can continue bringing world-class artists and performances to Twin Cities audiences and beyond – now and for generations to come. Please take a moment to check out the full list of upcoming events here, and enjoy the evening! Heralded as “one of the major musicians of our time” by Alex Ross of The New Yorker and as “America’s leading organ performer” by The Economist, the internationally celebrated organist Paul Jacobs combines a probing intellect and extraordinary technical mastery with an unusually large repertoire, both old and new. He has performed to great critical acclaim on five continents and in each of the fifty United States. The only organist ever to have won a Grammy Award—in 2011 for Messiaen’s towering Livre du Saint-Sacrément—Mr. Jacobs is an eloquent champion of his instrument both in the United States and abroad.

Mr. Jacobs has transfixed audiences, colleagues, and critics alike with landmark performances of the complete works for solo organ by J.S. Bach and Messiaen. He made musical history at age 23 when he gave an 18-hour marathon performance of Bach’s complete organ works on the 250th anniversary of the composer’s death. A fierce advocate of new music, Mr. Jacobs has premiered works by Samuel Adler, Mason Bates, Michael Daugherty, Bernd Richard Deutsch, John Harbison, Wayne Oquin, Stephen Paulus, Christopher Theofanidis, and Christopher Rouse, among others. As a teacher he has also been a vocal proponent of the redeeming nature of traditional and contemporary classical music.

During the 2020-21 season Mr. Jacobs performs with the Philadelphia Orchestra led by Yannick Nezet-Seguin for their digital streaming series including the Poulenc Organ Concerto, as well as chamber versions of Mahler’s Symphony No. 4 and Das Lied von der Erde; with the Cleveland Orchestra and Franz Welser-Most for the Poulenc Concerto, and the Jackson (TN) Symphony.  He appears in recitals with the Madison Symphony, Northrup Auditorium at the University of Minnesota, and in Sun City, AZ.

Highlights of Mr. Jacobs’ 2019-20 season included performances of Michael Daugherty’s Once Upon a Castle with the Philadelphia Orchestra and Kansas City Symphony; performances and recording with Giancarlo Guerrero and the Nashville Symphony, as well as recitals for the San Francisco Symphony, Spivey Hall, and in Dallas, Houston, Greenville, SC and more.

Mr. Jacobs studied at the Curtis Institute of Music, double-majoring with John Weaver for organ and Lionel Party for harpsichord, and at Yale University with Thomas Murray. He joined the faculty of The Juilliard School in 2003, and was named chairman of the organ department in 2004, one of the youngest faculty appointees in the school’s history. He received Juilliard’s prestigious William Schuman Scholar’s Chair in 2007. In addition to his concert and teaching appearances, Mr. Jacobs is a frequent performer at festivals across the world, and has appeared on American Public Media’s Performance Today, Pipedreams, and Saint Paul Sunday, as well as NPR’s Morning Edition, ABC-TV’s World News Tonight, and BBC Radio 3. In 2017 he received an honorary doctorate from Washington and Jefferson College.

Thank you for supporting Northrop!

MAKE LEGENDARY PERFORMANCES POSSIBLE!
At Northrop, we believe in connecting great artists and ideas with our community and to a new generation of audiences. Your gift helps make memorable arts experiences possible by supporting extraordinary performances and new arts commissions, and helping ensure accessibility to everyone through live-streamed programming, outreach to diverse communities and subsidized student tickets. Our Friends are at the center of Northrop’s biggest ideas and brightest moments on stage.

Become a Friend of Northrop today!
Donate online at northrop.umn.edu/give

A special thank you to our patrons whose generous support makes Northrop’s transformative arts experiences possible. Make your mark on Northrop’s future by becoming a Friend today, learn more by visiting northrop.umn.edu/give.

We gratefully acknowledge the support from, Arts Midwest Touring Fund, Minnesota State Arts Board, National Endowment for the Arts, and New England Foundation for the Arts.

We extend a special thank you to our event sponsors PNC Bank, RBC Wealth Management, and HGA.

This season’s listing is current as of 03/26/21.
Please contact Trisha Taylor at taylort@umn.edu  if you have any corrections or questions.

NORTHROP’S AEOLIAN-SKINNER ORGAN
Thank you to the generous donors who continue to support programming for Northrop’s beloved Aeolian-Skinner Organ. It is because of you that this magnificent instrument’s voice will be enjoyed by many for years to come. 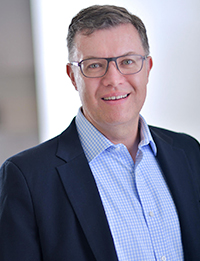 We’re so grateful to have you join us for these closing performances of our 2020-21 season at Northrop.

Without a doubt, it has been a season like no other.  Yet, it has been so exciting and reassuring to see how Northrop and our many artistic partners have adapted and given us such thrilling, thought-provoking, and emotional performances to help us through these difficult times. The artists, their talent, and their creations are more important than ever. Thank you for giving Northrop the opportunity to share their incredible work with you.

As we look forward to a more optimistic summer and the anticipation of our upcoming season, I hope you consider supporting the important work that Northrop has done and will do in the future. The Northrop Advisory Board is growing along with new opportunities to engage, so if you are interested in learning more, please contact us at northrop@umn.edu.

I can’t tell you how excited I am to see you all in your seats at Northrop as we wait for the curtains to rise on another amazing performance. Until then, stay safe and stay in touch.

THE NORTHROP ADVISORY BOARD

The Northrop Advisory Board is committed to the growth and awareness of Northrop’s mission, vision, and the continued future of presenting world-class dance and music in our community. If you would like more information about the advisory board and its work, please contact Cynthia Betz, Director of Development, at 612-626-7554 or betzx011@umn.edu.